In every age mankind attempts to fabricate great works, at once magnificent and impossible…

I’m struck by these words which open our beautiful musical, Titanic. Spoken by the architect of the “largest moving object in the world,” Thomas Andrews, we at once see the impetus and ambition that led to the pride, or rather hubris, of those in charge of the maiden voyage of the “unsinkable ship.” But as strange as it may seem, this story is ultimately not about the great ship, Titanic, but rather about those she carried on her voyage across the Atlantic.

We hold these truths to be self-evident: that all men are created equal; that they are endowed by their Creator with certain unalienable rights; that among these are life, liberty, and the pursuit of happiness.

The strongest theme that I see in this play centers around the idea of class, and how ultimately when push comes to shove, we are all equal in the face of the divine. As we more fully progress into this brave new world of the twenty-first century, we are entering a phase where we sometimes focus too much on that which makes us different from, and dare I say, even better than, those around us. Looking at the myriad of characters aboard, we see a variety of purposes in traveling on the “greatest ship that ever sailed the sea”.

Some have scrimped and saved to get ticket for the opportunity to travel to the new world in the hopes that they can carve out a better life for themselves and their families. Some are aboard for the chance to travel the world and mingle with the upper crust. Some have made this voyage many times, but never on such a magnificent, newsworthy ship. Whatever the reason, all have one thing in common–they are traveling together aboard a ship headed for doom.

I cannot imagine any condition which would cause a ship to founder. I cannot conceive of any vital disaster happening to this vessel.

When you stop to contemplate the hype and publicity that the maiden voyage of the Titanic garnered, you may see a correlation with the pressure we put on ourselves, our students, and our society. Greatness is not achieved overnight. It is the product of patience, focus, ambition, and drive. Too often in today’s world we want greatness without putting the work in over time. This constant need to be the greatest without pausing to analyze the consequences can be very detrimental.

Ismay, the owner of the ship, urges Captain Smith to go faster and faster in order to arrive in New York a day early despite Andrews’ advice that they proceed prudently. Amidst this tension, we see the mounting pressure placed on Ismay and the rest of the staff by the First Class elites, like John Jacob Astor and Benjamin Guggenheim, who are eager to arrive as soon as possible so as to get back to their business. Even Captain Smith is overconfident as he assures and reassures his crew that they are taking the fastest and most appropriate course for the season. Ultimately, as we know, the story ends the way of a Greek tragedy, and we see how the pride and folly of a few elites can cost so many their lives and loved ones.

As you watch this show, I hope that you will be transported by the beauty of the music, the hopes and dreams of the passengers and crew, the incredible exhibit in our lobby, and the spectacle of our first ever produced musical on our brand new stage. Working on this show has been a little like steering the Titanic, an epic adventure and an exploration into discovering the “perfection of physical engineering” that is our Performing Arts Center. I hope you have a safe journey as you sail the seas with our wonderful company.

To see more photos from the production click here. 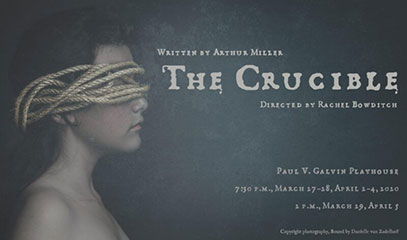